I’ve always meant to use this website to review stuff. There are a lot places out there to get reviews of various things. Amazon.com is one of those places. Other retailers have reviews too. Then, there are reviews you get from journalists and so forth. The problem with all of these reviews is that you never know how much you can trust them.

There are jobs posted out there right now, that are nothing more than writing fake, positive reviews for products on Amazon and other websites. On a retailer’s website, they want you to buy something, so you can’t help but wonder how solid those reviews are, or if some of them get deleted, or otherwise cherry-picked. Even if that weren’t the case, people who are upset about something, or who love something, are more likely to review than people who fall in the middle. Chances are the vast majority of people who use any product are neither die-hard fans, nor haters. I like my computer monitor just fine, for example, but there is nothing about it that seems superior to anything else I’ve seen. 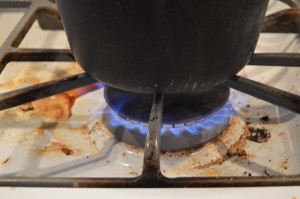 It’s hard to capture in a photo, but the flames go up the sides of the pot. – Either way, you can tell it’s really my stove based on the fact that it isn’t clean 🙂

Journalist reviews are no better. Most publications rely on freebie, loaner, products from the manufacturer to do their reviews. Too many reviews that are too harsh, and they might not get as many review products in the mail. Even if their reviews were 100% honest, they are usually based on just a few days using the product, often in ways that are not consistent with how the product will actually be used by people who end up owning it. I remember all too clearly that the gas stove I have in my kitchen was a Consumer Reports Best Buy. Guess what?

The problem isn’t that Consumer Reports is a scam. It’s that they don’t review products by actually using them and seeing how they do what they are made to do. Instead, they review products based upon their test of specifications. In the case of the stoves they review, they test the heat from the burner, and compare that to others. That’s great, but that isn’t what makes a stove a good stove.

On my stove, for example, only the so-called Power Burner, that Consumer Reports raved about, is capable of boiling anything but a very small pot of water. That’s strike one. Of course, Consumer Reports doesn’t actually try to cook on any stoves, they just use a thermometer, which made them miss one other glaring flaw. The “Power Burner” is very big, as in the diameter of the flames is so wide that only large skillets and pots can be used on it. Normal sized pots (like the kind you make macaroni and cheese in, which needs to boil) aren’t wide enough. That means the burner will make the sides just as hot (or hotter) than the bottom, and heaven forbid you have a plastic or rubber handle, because the burner will melt it as the flames lick up the sides of the pot.

Needless to say, Consumer Reports is dead to me. But, if you can’t trust the premier review magazine, and you can’t trust Amazon reviews, and journalists don’t really use the products they review enough to give good reviews, who can you trust?

That’s a fair question, and I’m hoping that for the limited things I review on this website (or I might start a different website for reviews, I haven’t decided yet) you can trust me.

If you can’t trust the other reviews, then why can you trust my reviews.

First off, I’ll be building up an array of review here. Hopefully, you’ll end up with some of the things and you can see how my experience stacks up to yours. Unlike websites or magazines where someone new is always reviewing stuff, it will always be me here. So, you’ll know how I have reviewed other things.

Second, I don’t get any free stuff from anyone. Although I am not opposed to this, feel free to send me free stuff and I’ll review it fairly and honestly, with the idea that, as above, my reputation is online with each review. Either way, there is no incentive for me to sugar coat anything.

Third, I only review stuff I own. One of the problems with reviews on Amazon and other places is that for some reason, some people just LOVE to review things. I guess they like the attention or status as an expert, or whatever. That means that they review things they don’t even own. Amazon puts a special icon by reviews written by people who actually bought the thing they are reviewing from Amazon, so at least you know they aren’t reviewing it based on what they saw in a store display.

Fourth, one of the biggest issues with determining if you want to buy something is that any pictures are taken from a very specific angle in perfect lighting. You can’t see the thing that would make you not buy it (or to feel good about buying it.) I’ll take pictures of the things I review from multiple angles using just the lights in my house and the on camera flash. So, what you see is what you’ll get.

These pictures will also serve as proof that I actually own the thing I am reviewing. You won’t see manufacturer supplied images, like you see elsewhere. And you won’t see photos that were clearly staged and shot by a professional photographer. You’ll see pictures of stuff on my living room rug, or on the table, or against the wall. That way, you can know for sure, it’s really my stuff, and it’s really in my house.

Since Christmas is coming, I’ll probably start with toys and books that your kids might want for Christmas so that you can both know what is worth buying, as well as maybe put some reality into how things work for your kids before they are disappointed that the thing they open on Christmas morning isn’t quite what it seemed in the TV commercial.

This entry was posted in Reviews and tagged Reviews. Bookmark the permalink.

One Response to Dad Reviews Stuff