It Is OK for Kids to Use Your iPad

Every so often, a news article comes out where a child ran up a huge bill using their parent’s iPad. This is a flaw in Apple’s parental controls, or lack thereof. However, inevitably, someone will come along and say something like this:

Stop using the iPad as a babysitter, and buy that poor kid some blocks!

Um… so you’re saying it is O.K. to use blocks as a babysitter? That doesn’t sound right either. 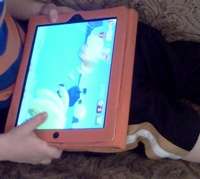 In fact, I would submit that there is not an object on this planet that would be an acceptable babysitter. On the other hand, that doesn’t mean your child should not be using an iPad.

The people that say things like this either don’t actually have kids, or they are the kinds of people who can’t wait to tell you that they don’t even HAVE a TV. Either way, this is not who to listen to regarding your children, iPads, or anything else.

iPads Are Fine for Children and Toddlers

Let’s start at the beginning for the really cheap seats.

There are many different developmental stages of childhood, and each one requires different levels of adult supervision. You can’t leave an infant unattended for even one minute unless they are in a safe, secure place like a crib or playpen. Later, you can, and should, relax that vigilance. For example, they can be in the kitchen playing on the floor while you do the dishes. After that, they can even be in their own room. You can about imagine the consequences of kids raised without any chance to ever be independent.

I lock my work computer when I’m not using it so my 3-year old can climb up in the chair and type just like Daddy. I don’t forbid him to touch it. The non-work computer is available for games and YouTube videos. They love the Gummibear videos and the Duck Song as well as the Muppets Popcorn video.

There are age appropriate links to PBS Kids, Disney, and other games. This is NOT using the computer as a babysitter. This is allowing my child to play with one more toy, just like blocks, cars, trucks, dollhouses, and anything else. I do supervise. I also do limit the total time spent on the computer and other devices. Often, I watch from the couch while reading or writing. I can see over their shoulder to the monitor and hear the speakers. They enjoy themselves and I am available should they have any questions (they don’t) or if they want to show me anything cool they did (they do). In the meantime, they’ve learned that computers are fun, how to use a mouse, and keyboard and more. Don’t you think that will serve them better in life than the alternative?

An iPad is not magical. It is not sacred. Like every other item Dad uses, they are curious about it. They want to use it, and they want to play with it. I do not deny them that. Why should I?

Unfortunately, Apple has fallen behind the times with the iPad and there is no way to create different profiles for different family members, or to turn on a meaningful child lock. That means we have to jury-rig something up. For our iPad there are certain Mommy and Daddy only folders, and they are not allowed to go into Settings. Everything else is fair game.

We do not use the iPad (or any other object, duh!) as a babysitter. However, that also does not mean that we stare over their shoulder constantly. The oldest likes to lay on the floor and play. The youngest takes up residence in the leather chair. While using the iPad, they get the same level of supervision they get with anything else. I am around and available should they need anything, and I watch and list to make sure they are safe. When they WANT me to help or watch, I do so gladly, but any child older than a toddler deserves the chance to do some things on their own. This includes playing with the iPad.

Many iPad games are great for children. The youngest loves Endless Alphabet and Littlest Petshop, for example. Also beloved are games like Pitfall, Tiny Tower and Angry Birds.

Of course, the big negative to even the best kids games on iPad is that they are often stuffed with ads and, of course, chances to spend money for more or better items. This is a problem, but it is not a reason to forbid your child to use the iPad, nor a reason to stand over them like a sentry while they play. Rather, this is a flaw that Apple really should consider fixing before they increase the numbers of people who think iPads are a negative influence on children.

In the meantime, we have our iPad configured to avoid any incidents. In-app purchases are disabled. The password is long and they don’t know it. I’ve taught my kids that whenever an ad or commercial or anything that isn’t part of the game pops up to “Click the X”. Even the 3-year old says, “Where’s the X?” while waiting for it to appear on those ads where they delay its appearance. If there is no X, then click No or Deny. If it is anything else, ask first. If they do accidentally trigger something else, they taught themselves to just click the Home button and go back into their game.

Smart parenting is not denial parenting. Parents should be encouraging their children to try as many things as they can, whether that is outside, in their room, or in the living room.  Objects like the iPad should be explained and understood, not feared and hidden. Don’t let yourself be sucked in by those who think kids should be denied something that is fun just because it might be abused. Instead, teach and monitor, and they’ll have more respect and understanding for the world around them.

This entry was posted in Activities for Kids and tagged computers, games, iPad, Parenting, Parenting Tips, Toys. Bookmark the permalink.